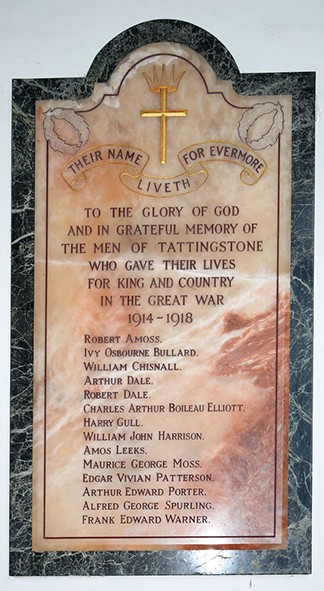 In 2014 we commemorated 100 years since the start of the First World War. The fifteen men from Tattingstone who lost their lives in that war are named on the memorial in St Mary’s and also on a plaque in the village hall that honours both those who died and those who served.

As a tribute, on the 100th anniversary of the death of each of the fifteen “fallen”, I have written their personal story, gathering as much information from as many sources as possible about their lives and circumstances. Each story has turned out to be very different and has thrown light on various threads of social and local history and tells us a lot about people from all walks of life in those times. Initially each story was published in the Tattingstone News. Now these stories are here on the village website and in some cases expanded with the discovery of new information.

At the end of the Great War, the then Vicar of Tattingstone, the Reverend Charles Elliott, handwrote a book called the Tattingstone Liber Vitae or Book of Life with his own personal record of the men from the parish that died, compiled that “their memory may be preserved in time to come”.

Those tributes from 100 years ago are reproduced here in the section entitled “Tattingstone Liber Vitae” and it is very satisfying that his intention for future generations to “learn by their example” has been fulfilled.

To the left of this screen, you will find a list, and more information of the fifteen men from Tattingstone who never returned.

​This project remains work in progress and as and when new information comes to light corrections and additions will be made. If you can contribute any more to these stories or know any other local WW1 stories or memories handed down please feel free to let me know.