The life story of Lt Colonel Roger Orme Kerrison couldn’t be more different from any of the other men from the village who died in WW1. He was born into a wealthy family, he was “Lord of the Manor” of Tattingstone Place and he’d already had a distinguished military career by the time WW1 broke out in 1914 when he was forty. His death however was not at all illustrious - whilst serving as Lieutenant Colonel in the Reserve Regiment of Cavalry attached to the Australian Artillery on active service in France he died in hospital of dysentery and he is buried in Wimereux Communal Cemetery, Pas de Calais. 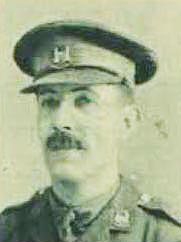 Roger Orme Kerrison was born in Norfolk. His father, also named Roger Kerrison, was a banker and a prominent man in his time being a JP and even High Sheriff of Suffolk in 1900. Before buying Tattingstone Place in 1893 the family had lived in Tower Street in Ipswich and Glevering Hall, near Hacheston.

Roger junior was educated at Eton and went on to Trinity College Cambridge, typical for his family, where he achieved a BA in 1894 plus a rowing ‘blue’ twice.

From Cambridge Roger joined the Loyal Suffolk Hussars (Yeomanry) whose officers and men came from landowners and farmers, which was usual then, and he subsequently commanded the Regiment. Piecing together his military career he served in various different Regiments with promotions onwards and upwards. In 1897 Roger is listed as a Captain in the Suffolk Imperial Yeomanry in a large tome entitled “Troops to be deployed in Celebration of the 60th year of the Reign of her Most Gracious Majesty Queen Victoria”.

Following the outbreak of the Second Boer War as a Major in the Loyal Suffolk Hussars he left Southampton with the 43rd Company at the end of January 1900 for Cape Town. Although this war did not end until 1902, Roger resigned his commission in April 1901 and his Company returned to England that July. Later that month he was presented with the South Africa Medal by none other than HM the King, Edward V11, in the year of his accession to the throne.

From 1902 onwards Roger is recorded as being a Captain in both the Staffordshire and Suffolk Imperial Regiments and then a Major Aide de Camp to the Commanding Officer of the Harwich Voluntary Infantry Brigade as part of the Loyal Suffolk Hussars.

By 1906 Roger was a JP for Suffolk and like his father before him, a churchwarden at St. Mary’s so it would appear that his military career was over. Roger had married Diana Elizabeth Postle Heseltine in 1896, she being from an eminent society family with royalty attending their wedding - Queen Victoria’s sixth child, HRH Princess Louise. They had three children, two daughters and a son born between 1898 and 1907. Records show them embarking on some long distance sea travel and certainly the senior Kerrisons would winter in the South of France. In fact Roger’s mother Florence had died there in the winter of 1903 - her body was returned to Tattingstone in 1908 to be buried in St Mary’s!

In 1911 Roger and his young family were very much in residence at Tattingstone Place along with their twelve servants including a governess from the Alsace region, then part of Switzerland, and surprisingly only one servant came from Suffolk! Alas that seemingly idyllic family lifestyle did not last much longer ... and the Great War was not the only reason!

Roger Orme Kerrison has long been a mystery to me for he is named on the Suffolk Roll of Honour but not on the one in St Mary’s Church nor is he mentioned in Canon Elliot’s written tribute to all the other men from the village who died in WW1, the Tattingstone Liber Vitae. So my personal mission has been to discover the reason for these omissions and eventually it all fell into place when I learnt that Roger and his wife had divorced in 1914 and that there was a second Mrs Kerrison by the time of his death. Sadly it was not a “conscious uncoupling” as we hear of today, with Diana Kerrison appealing to her husband to return to her for the “restitution of his conjugal rights” and he being named as the co-respondent in the divorce by the first husband of his second wife –it was even reported in a newspaper under the heading “A Stormy Scene and a Maid’s Discovery”! And in those times to be cited as the third party in a divorce on grounds of adultery was social death. So with Diana Kerrison still active in village life and Canon Elliot being of the high church, Roger’s passing was not honoured/commemorated here in Tattingstone despite his military career and final sacrifice for his country. He is however named on the Roll of Honour in the Village Hall and my best guess is that when that was created at the end of the Second World War, the scandal was all but forgotten.

Now my story doesn’t end there because to bring it right up to date, during my research I discovered that Roger and Diana’s eldest daughter Enid married a man called Andrew Motion, who had a son called Andrew Motion who also called their son Andrew and who is in fact Sir Andrew Motion the former Poet Laureate! Until I contacted him Sir Andrew was unaware that Roger Orme Kerrison was his great grandfather and that he died in WW1 in France despite the fact that he has written poetry about that War and has actually hosted literary tours of the WW1 battlefields in France.

I am pleased to say Sir Andrew has been very interested in my research and has permitted me to quote from one of his WW1 poems “An Equal Voice”:

“... I saw with my own eyes the lines advancing

In such admirable order quickly melt away.

Yet not a man wavered, or broke the ranks

Or made any attempt to turn back again.”

With thanks to Jennifer Jones and Jean Austin for War Grave info and Sir Andrew Motion of course.