In October 1915 the people of Tattingstone must have been very sad to hear that yet another of their young men was not coming home.  The war that everyone thought would be over by Christmas 1914 had entered its second year.  William Chisnall, the fourth man from the village to die, was killed in action on the 13th October 1915 and like the three men who had died before him he was serving on the Western Front in France.   William Chisnall, Private 11062 5th Battalion Royal Berkshire Regiment, is commemorated on the Loos Memorial, loos-en-Gohelle, Pas de Calais, France.

​William was born and bred in Tattingstone.  He was the fourth son of Alfred Chisnall and Sarah Ann Sage who had eight children altogether.  Alfred was a carpenter and came from Stutton and Sarah was born in Tattingstone.  When William was three they lived near The White Horse but by 1901 with a growing family they had moved near The Chapel.  It was noted on the census that Sarah, aged 50, was suffering from epileptic fits.  By 1911 William aged 22 and single was a gardener living with just his mum and dad near The Post Office.

​By the time War broke out William had moved to London so when he joined up on 1st September 1914 he was enlisted in the Royal Berkshire Regiment.  William’s great uncle on his mother’s side had a firm of shop fitters in the Grays Inn Road, in London – Frederick Sage and Company Ltd. – and William had left Tattingstone for the opportunity to work in the family business. 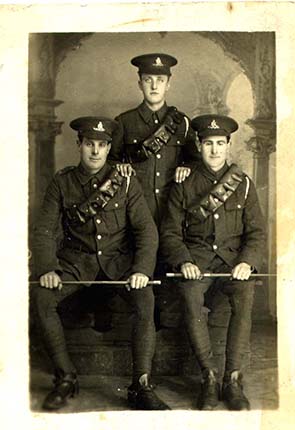 Of William Chisnall’s death, the Rev Elliott wrote in the Liber Vitae that he could find little out except that his Company Commander wrote:

“On making enquiries amongst the men, very few of whom, who took part in that attack, returned, all I can discover is that he was hit somewhere in the face when he had advanced about 20 yards from our trenches.   The Sergeant from whom I got my information saw him hit … I gather from the Sergeant that Chisnall must have died very soon after being hit.  He died a gallant death”

I wonder if it was any comfort to his family and friends to know he died a gallant death!

This photo is of William Chisnall (centre) and brothers Robert and Arthur Dale whose story is told later.

It turned out from my research into Frederick Sage & Company Ltd that there was a whole new and fascinating side story to be told about William’s great uncle Frederick Sage who went from being a journeyman carpenter selling his wares around the local area to founding a most successful global business purely through his own inventiveness, foresight and determination.  Although Frederick was from Freston, his life story is worth a separate mention on the website and this will be called “Frederick Sage and The House of Sage”.

​It also transpires that the Sages, the family of William’s mother Sarah, was a large local family and there are one or two leads which I intend to follow up on some others from that family.   In fact I am told  there are still Sage family members living on the Shotley Peninsular.

Thanks to Jennifer Jones and Jean Austin for War Grave information and acknowledgements to Mick Cook for the photograph.